During her years in Cavendish, Maud wrote and sent off numerous poems, stories, and serials to Canadian, British, and American magazines. Despite many rejections, she eventually commanded a comfortable income from her writing. In 1899, she earned $96.88 – not much by today’s standards but a nice sum at the turn of the century. Her earnings from her writing increased to $500 in 1903.

In 1905, she wrote her first and most famous novel, Anne of Green Gables. She sent the manuscript to several publishers, but, after receiving rejections from all of them, she put it away in a hat box. In 1907, she found the manuscript again, re-read it, and decided to try again to have it published. Anne of Green Gables was accepted by the Page Company of Boston, Massachusetts and published in 1908. An immediate best-seller, the book marked the beginning of Montgomery’s successful career as a novelist.

After Montgomery’s death in 1942, the National Sites and Historic Board of Canada declared her a person of national historic significance. In 1999, she was voted one of the top 20 Canadian heroes in a Dominion Institute and the Council for Canadian Unity internet survey. In the same year, CBC held a millennium poll and Montgomery was voted the most influential Canadian writer of the twentieth century. In 2000, L.M. Montgomery was chosen by Maclean’s magazine as one of twenty-five Canadians who inspired the world.

On May 15, 1975, Canada Post issued a stamp to “Lucy Maud Montgomery, Anne of Green Gables” designed by Peter Swan and typographed by Bernard N. J. Reilander. The 8¢ stamps are perforated 13 and were printed by Ashton-Potter Limited. 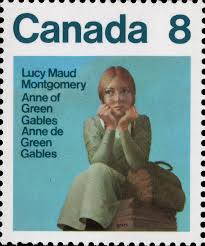 An Excerpt from the book “Cavendish: Its History Its People” by Harold H. Simpson. 1973.

Here in the 1700’s, the date is not recorded, occurred the first and, we believe, the only murder in Cavendish.

Captain LeForce commanded a pirate ship.  He and the mate had quarreled over the distribution of captured treasure and, as was customary at the time, decided to fight a duel.  They anchored off the cape, rowed ashore and as the Captain was pacing off the distance for the opponent’s stations, the mate shot him in the back.  LaForce was buried on the cape but with erosion by the sea the grave has since been long since washed away.

The evolution of Cavendish may be summed up in the following term.  “It was an axe and manpower that turned a forest wilderness into a thriving seaside farming community; and pen and paper in the hand of a woman, Lucy Maud Montgomery that turned the same farming community into the world renowned tourist destination it is today”.

Which is more powerful, the pen or the axe?

2. Stanley Bridge
Named by E.L. Lydiard in 1865 for a bridge built 10 years earlier over the Stanley River (named for Sir Hans Stanley, in 1765 the Lord of the Admiralty).  It had originally been called Fyfe’s Ferry for Wm Fyfe who operated a ferry there for 40 years. (source: Geographical Places Names of Prince Edward Island)

4.  Bayview
Named for its location and view over New London Bay.

5.  Mayfield/Cavendish Road
Originally known as Cavendish Road.  It was changed to Mayfield at a public meeting in 1897. (Source: Geographical Places Names of Prince Edward Island)

6.  North Rustico
Named for Rene Rassicot from Normandy 1724, he was an early Acadian settler to the area. (Source: Geographical Places Names of Prince Edward Island)

7.  Sandspit
A narrow strip of sand dunes measuring 2 miles in length which divides New London Bay and the Gulf of St. Lawrence.

8.  New London Bay
Adjacent to the Gulf of St. Lawrence.  Named by Samuel Holland in 1765 Grenville Bay for George Grenville, then Prime Minister of the United Kingdom.  Holland also added the second name as used by the French, Petite Havre.  The Mi’kmag called it Kicheboogwek Booktaba, “bay of shoals” or “enclosed Bay”. (Source: Geographical Places Names of Prince Edward Island)

10.  Graham’s Lane
Named for the Graham family who continue to reside on the Graham Homestead adjacent to the National Park.

12.  Cawnpore Lane
As they were finishing building a fishing shed on the Cavendish Cliffs in 1857, word was received of the Massacre at Cawnpore during India’s War of Independence.

The area from Stanley Bridge to North Rustico is made up of the north sections of three lots: 22, 23 and 24.

Lot 22 was given to John Gordon and Capt. Wm Ridge, Esq.  Description:  “the lands and woods are good; no cleared land and no houses; the township is very well situated for fishery, but Grenville Bay (New London Bay) is only fit for small craft”.

Lot 23 was given to Allan MacLeane and Lauchlin MacLeane.  Description: “the woods and lands are very good; no cleared land and no houses; the part of the township where Hunter River with its small branches intersects is very good”.

Lot 24 was given to Lieut. Col. Charles Lee, Esq. and Francis MacLeane.  Description: “the woods and lands are very good with some oak; no houses but some winter cabins 60 acres of cleared land;  this township is one of the best on the Island as well for its fishery as lands the woods being very good will pay for the clearing it”.

The Simpsons, Clarks and MacNeills

The Meachams 1880 Atlas illustrates how well the Simpsons, Clarks and MacNeills prospered during the 90 years following their arrival to Cavendish.  During this time they were joined by many other families who moved into the surrounding areas and established homesteads.

These early families made their living from the land and sea that surrounded them.  They were involved in farming, fishing, lumbering, shipbuilding, milling, trading and shipping.

At the provincial land registry office records show that on August 31, 1789 William Simpson leases 500 acres from William Winter, the proprietor of Lot 23.

There is some question as to if William and his sons came to build a cabin for the family to return to the following spring.  It is known is that the spring of 1790 that William and his family packed up their possessions, supplies and livestock and moved to Cavendish to establish a permanent home there on their leased land.

William and Janet Simpson brought their five youngest children: Jean, James, Jannet, Charlotte and John, ranging in age from 22 to 11 years; as well their daughter Helen and son-in-law William Clark; and their son William Simpson Jr. and his new bride Mary Miller of Covehead.  In 1791 they were joined by their daughter Margaret and son-in-law John MacNeill.

On April 1, 1791 John MacNeill leased 100 acres east of the Simpson property and on September 22, 1803 he leased another 400 acres as shown on the 1809 survey, prepared by Robert Fox.  The survey also shows the location and boundaries of William Simpsons original 500 acres lease which actually includes 565 acres, the land was divided amongst himself, two sons and one son-in-law.